What are Active Directory's Trim Levels?

How is the "Security Score" for users constructed?

The security score is based on the following security settings per user:

Each "yes" response is weighted evenly, so if you have 6/7 requirements, your security score would be 85.7.

The statuses are determined as follows:

How are group changes over the last 24 hours determined?

Liongard looks at replication logs over the last 24 hours where attribute metadata replication has occurred on any of the protected groups (detailed above). It looks for any linked objects, in this case Groups or Users. It does not pull the actual metadata changes only linked object changes.

It depends on SDAdminHolder propagation sync setting. This is normally set to 60 minutes, but it can be adjusted by editing your registry setting.

Can I exclude users from User-Related Active Directory Actionable Alerts?

For several Active Directory User-Related Actionable Alert Rules, built-in is an if statement, stating that if a user is in a group called “RoarExclude” then exclude them from this Alert. To utilize this feature, you will need to create a Security Group named “RoarExclude”

The following Metrics include the RoarExclude filter and can be used for custom Actionable Alert Rules:

The following prebuilt Actionable Alerts include the RoarExclude filter:

To exclude a user from another Active Directory Metric, at the Users object level, inside the brackets, add the condition followed by the exclusion string as shown here:

Typically, the information found in the Domain Account Policies section of the Overview page is being pulled from the Default Domain policy. 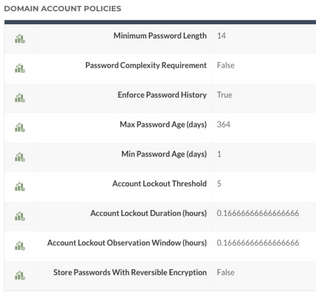 Why does my Active Directory Inspector return blank DHCP data?

The Active Directory Inspector will only return DHCP details when deployed to the machine running the DHCP role.

Updated over 1 year ago